An excellent pianist and speaker!

A journey beyond borders and time, Eastern Winds will set you dreaming with emotion and tenderness. Discover the mysterious and seductive works of Anton Batagov, the unforgettable melodies of Frederic Chopin, the minimalist sounds of Miodrag Lazarov Pashu and the jewels of Marko Tajcevic's imagination! This programme, imbued with an intimate and lyrical sensibility, combines reality and the imaginary in the rhythm of a hypnotic musical cadence.

Viktor Lazarov is a young Serbian Canadian pianist, musicologist and entrepreneur. A silver and bronze medalist at the Concours de musique du Royaume in 2017 and 2016, he has performed at numerous festivals including the New York City International Keyboard Institute and Festival, University of Florida International Piano Festival and Burgos Music Festival in Spain. Since 2017, Viktor has performed more than 20 solo piano recitals across Canada and in Serbia. His research and creative activities have allowed him to share his research with the general public on the radio and in concert-conferences. His recordings have been broadcast on television and radio in Quebec, Ontario, the United States and Serbia. 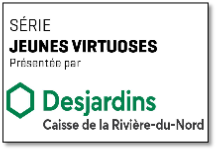